Modiin sits near the main highway in antiquity which linked the cities of Jaffa, on the coastal plain, and Jerusalem, in the mountains.  This road is one of the few roads actually named in the Bible.  It is called “Maaleh Beit Horon”, the ascent of Beit Horon. (There are only 3 such ascents mentioned at all:  Maaleh Beit Horon, Maaleh Adumim, and Maaleh Akrabim.)  Finding a passage with a relatively low grade throughout to connect these two cities would have been very important, not only for moving passengers and cargo, but for transporting armies going to war.  Because of its strategic importance, control of this road is very important for regional politics. 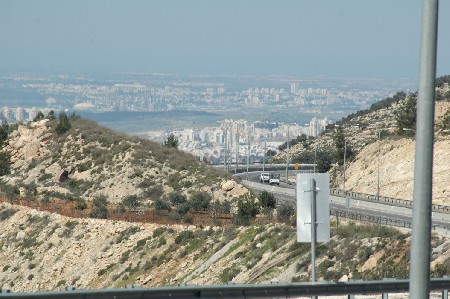 What was the route of the road?  The road left Jaffo through Lod, then went from Lod through the Ayalon Valley, up through Beit Sira of today, transversing through the modern day villages of Beit Ur el Tachta and Beit Ur el Fuka, snaking around today’s Givat Zeev to Nebi Samuel before entering Jerusalem from Ramot.  More or less.   Roads in antiquity did not have a definite edge or only one way.  They were more like beams of light, with more traffic in the center and then tapering off on the edges.

During the era when the tribes of Israel entered in and settled the land of Israel, this road served as a staging ground for Joshua when he goes out to fight the Amorites.  They succeed against the Amorites, but cannot capture all the cities on the coast.  The powerful Philistines and Phoenicians rule there, and their sophisticated weaponry and fortified cities are no match for the nascent nation.   The children of Israel exert control over the Shefela, the lowlands, which borders the coastal plain, and that area becomes a actual border of sorts.  Think about the battles in the books of Joshua, Judges, and Samuel.  Many of these battles take place in the Shefela.

After the return to Zion after the destruction of the First Temple, the area of the Land of Israel exists as a satrapy in the Persian government.  From then through the conquest of Alexander the Great, the Maccabean revolt, the Romans and the Byzantines, the entire country is united, either as an independent nation or under foreign rule.  The road continues to be the main route to Jerusalem.  Also, the fact that there is (relative) peace, means that the region of the Shefela can flourish.  This is when the city of Modiin comes into its own.  Founded, populated and then made famous by Judah Maccabee and his brothers, this Jewish town near the road was “well positioned”, leading to its wealth and success.  The Byzantines built heavily in the region, erecting a massive basilica over (maybe) the site of the Maccabbean graves.

But all was to come to a grinding halt.  The Moslems conquered the land of Israel in 632 C.E.  They had no desire to revere a Jewish military/religious hero.  The site of the Maccabbean graves became irrelevant and forgotten.  But what about the city of Modiin?  The city continued to do well and prosper, but with a Moslem population now.

About 450 years later, a new change came to the Land of Israel which would have a huge impact on both Maaleh Beit Horon and the city of Modiin.  European Crusaders attack and capture the entire area of the Land of Israel.  They are not 100% successful, however.  They practice “religious tolerance” especially towards the Moslem population.  Tolerance, but at an arm’s length.  And that includes on which roads they are willing to travel.

Take Maaleh Beit Horon.  The Crusaders don’t like this road.  It is “dangerous” as it goes too close to large Arab cities.  So the Crusaders build their own road.  (Not exactly build, they just make improvements to an existing, smaller, local road.)  This road connects the Crusader sites of Lod, Emmaus, Abu Ghosh, Aquabella (Ein Hemed), Ein Kerem and finally Jerusalem.  It is in the area of Rt. 1 of today.  There are hairpin turns, there are cliffs, there are steep ascents and descents.  The Crusaders don’t care.  They are far away from the Moslem population and close to their own religious sites.

Because the focus changes away from Maaleh Beit Horon, the settlements along that road suffer.  The city of Modiin shrinks and people don’t visit.  It turns into a small village.
For the next 1000 years, the main route to Jerusalem from the coast will be the Crusader road.  Advancing armies, like that of the British during WWI will still use Maaleh Beit Horon – it is the sensible road.  But normal traffic will flow on the Crusader path.  When supplies are being taken to Jerusalem during Israel’s Independence War, it will be along the Crusader road.  Even with the threat of ambush from the encroaching Jerusalem Hills, it is still a more sure bet than traveling close to larger Arab towns, such as Ramallah, and El Jib which are along Maaleh Beit Horon.

After the Independence War, passage on Maaleh Beit Horon is impossible as a large section of the road is in the country of Jordan.  Ancient Modiin is in Jordan and exists as a small village on the border.  Development in the Modiin area is stunted on the Israeli side as well.  It takes 16 years for the Israeli government to approve a Jewish settlement in the area of ancient Modiin with the founding of Mevo Modiim in 1964, near the Maccabbean graves.  The area is once again on the border as it was during the time of Joshua, but this time the border is to the East.

Three short years later, in 1967, as a result of the Six Days War, Modiin will again be in the center of the country.  Israel conquers the territory of the West Bank, Judea and Samaria, as well as other territories.

Starting in the late 1970’s and continuing through the 1980’s and 1990’s, a building spree in the Modiin area will take advantage of the central location, especially since the ancient road, now updated to become Rt. 443, is open.  Once again, traffic can flow unimpeded along the ancient route between main cities of the coast (specifically Tel Aviv) and Jerusalem.

And finally, in 1996, the modern city of Modiin (situated in the area of the ancient city) will welcome its first inhabitants.

All because of the road.