Yesterday, I stood at the base of the steps leading into Jaffa from the sea.  I tried to imagine myself as Rachel Mittlemen, just arriving from Poland in 1924.  She arrived as I did, pregnant, and driven by a dream.  I don’t know much about her life, and the snippets I do know are through her husband Chaim’s words.

She was the most beautiful girl in Lubartow, Poland, and when Chaim returned, broken, from the front, he wooed her.  Her hand was not to be won by just anyone, but rather by one who would follow her to the end of the world, to Palestine.  Chaim was not a Zionist, but a well-respected carpenter like his father.  Whether it was because of her beauty, or because of Chaim’s father’s brutal murder on the road outside of Lubartow at the hands of non-Jews, Chaim agreed.   I  don’t know what drove Rachel to make this condition.  Was she a Zionist, believing in an ancient promise? or a sufferer like Chaim  of a repressive present?  The two set out and because Rachel had a cousin living in Jaffa and Chaim had a trade, they were able to receive visas from the British to come to Palestine.

When they drew near to the Port of Jaffa, Chaim tells of his wonder in new sights and new people, new l 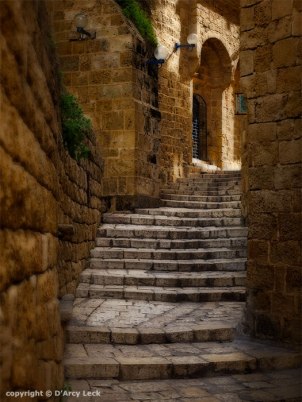 anguages and new challenges.  Rachel silently gets off the boat and stands with her future ahead of her and within her.

I hear the story through Chaim’s words and think of her – a simple person, one of the many anonymous personalities living and building quietly, raising families.  But anyone who makes the journey, deciding to pick themselves up from one place and move to the Land of Israel, driven by an ideal, can relate to Rachel and see themselves in her.

On Yitzchak Sadeh Street in Tel Aviv, there is a building which bears a simple plaque attesting to Chaim and Rachel Mittleman building a house there.  A simple plaque memorializing simple people and simple acts.  Those of us whose simple acts build up the country can see ourselves in their story.  And as I stood at the foot of the steps leading from the sea into ancient Jaffa, it was Rachel Mittleman who ascended with me.