Judaism and representative art have had an uncomfortable history. In the Bible, one of the Ten Commandments is not to make any graven image as a safeguard against challenging monotheism. Yet, already from the Byzantine period, images made their way into Jewish art in the floors of synagogues in the Galilee. Since there is no blueprint for “Jewish” style, Jewish art takes on the style of the dominant culture. These Galilean synagogues are in the Byzantine style but with Jewish themes.

Researchers have been investigating images on incantation bowls found in the 5th-7th century C.E. Jewish art of Babylonia. During this turbulent time, the Rabbis felt that the allure of Christianity would draw Jews away from Judaism. As a safeguard against this, they allowed representational art, but with a Jewish twist.

Evil forces exist in Judaism. In the Bible, these evil forces are wholly under the control of God and are part of His arsenal for punishment. In Babylonia, mythical sources of evil seem to be directly accessible to the simple person. Jews, also, take these traditionally Jewish agents of evil and give them an independent life, portraying them in art.

The most common Jewish demons which were recognized by Babylonian Jews and featured in art, are Lilith, Samael, and Ashmedai. Lilith, who is mentioned in the Bible, is pictured as a combination of two Babylonian goddesses, is accused of both killing women during childbirth and murdering infants, while at the same time seducing and murdering young men. Samael is the angel of death and tempts good people to sin. He is succeeded by Ashmadai, who slays young men before their marriage, and is depicted with horns. This is the first depiction found of a demon with horns. 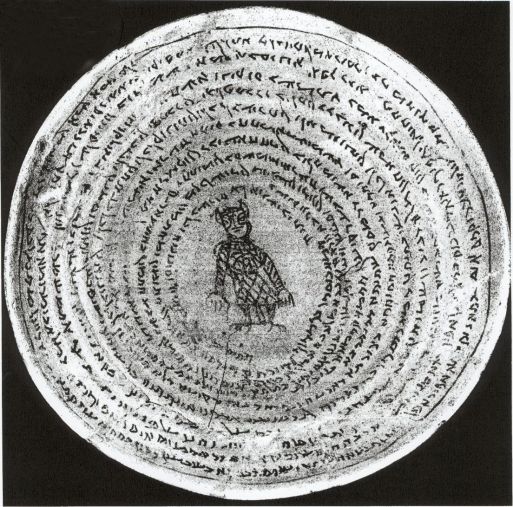 The incantation bowls on which these demons were drawn were part of a multi-layered protection system for inhabitants of a house. First, the demons are drawn with their hands and feet bound in order to arrest their mobility. Then the bowls are buried upside-down under the floor of the house in order to “trap” the demons and keep them from ascending into the house.

These customs were promulgated to deal with the most inexplicable tragedies of the day. Loss of those who are most vulnerable keeps even modern man scratching his head to try to understand the reasons, as it did in antiquity. The idea that a demon could be responsible for these tragedies follows mankind throughout the ages and the imagery of those demons in Jewish Babylonian homes, horned, also touches a chord and travels to Europe. Who can imagine Dante’s inferno without horned demons? It’s just interesting that that image which continues until today came from Jewish homes in Babylonia 1500 years ago.