Alexander Yannai, Jewish king, creator of an empire unrivaled since the time of King Solomon, is a colorful figure in Jewish history. The third son of John Hyrcanus, Judah Maccabeus’ great nephew reigned Judea from 103 B.C.E. to 76 B.C.E. We remember Judah Maccabeus from the story of Hanukkah which will be celebrated this month. 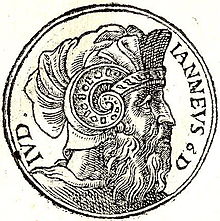 After he becomes king, a title he took along with high priest, Yannai spends much of his reign engaging in battles. On the foreign front, he enlarges Judea by conquering in the north, south, east and west. He builds a lighthouse castle in the Dead Sea to control the lucrative trade of spices which he wrested from the Nabateans. Along the Mediterranean coast, he conquers many of the ports, including Gaza and Akko. He pushes north into what is now Syria and south to control the Negev.

Many see this expansion, coupled with increased economic stability and military might staving off conflicts, as what Judea will resemble in the end of days.

However, there was a darker side to his reign, especially when it came to dissension within Judea. Both Josephus and the Peshur Nahum, part of the Dead Sea Scrolls, paint a picture of a king who would not hesitate to go to extreme lengths to ensure his rule and stamp out his critics. Now archaeology may have found proof of just how far he was willing to go.

According to recent finds in Jerusalem in the area of the Russian compound, the ancient sources were not exaggerating Alexander Yannai’s cruelty. Remains from a mass burial were found by Kfir Arbiv, Yossi Nagar, and Tehillah Lieberman in a cistern. They claim that these skeletons were all from one event and deposited at the same time. Based on the bones and pottery shards which were also found in the cistern, the find is dated to the days of  Yannai.

The bones attest to a violent death and have countless signs of sword wounds on the bones themselves. Broken cheeks and severed skull bones suggest beheadings. From analysis, the bones were not just men, but also women, children and even embrionic bones.

Alexander Yannai faced opposition from groups of Jews who opposed the ruler-ship of a non-Davidic king and priesthood of someone who was not a descendant of Aaron, the first high priest and brother of Moses.  Yannai opposed the Perushim, who were one of the larger sects in Judea at his time. He also was hated by the Qumran sect, who called him the “Lion of Wrath”.

As a response to his detractors and to keep the peace, Josephus relates that in Jerusalem:

“His [Yannai’s] rage was grown so extravagant, this his barbarity proceeded to a degree of impiety; for when he had ordered 800 to be hung upon crosses in the midst of the city, he had the throats of their wives and children cut before their eyes; and these executions he saw as he was drinking and lying down with his concubines.” Josephus, Wars of the Jews, 1:4:97

This so frightened the population, that they fled Jerusalem by the thousands, according to Josephus, until Yannai died.

“So at last, though not till late, and with great difficulty, he [Yannai], by such actions, procured quiet for his kingdom.” ibid, 1:4:98

The Second Temple was destroyed, according to the rabbis, because of senseless hatred. Yannai, in destroying his opposition so brutally, procures peace for his kingdom, but stirs hatred among the Jewish people. When searching for peace, he forgot goodwill towards his subjects.