The Parable of the Good Samaritan is one of the most familiar stories of the Christian Bible. Jesus defines the behavior of the Good Samaritan, who helps the injured man on the side of the road, as what it means to be a good neighbor. This story has been popularized by laws based on helping others in extreme situations, and almost everyone has heard of the Good Samaritan Law even if they have little reference from the Biblical text. A new study gives some light to who exactly were the Samaritans and where they came from. 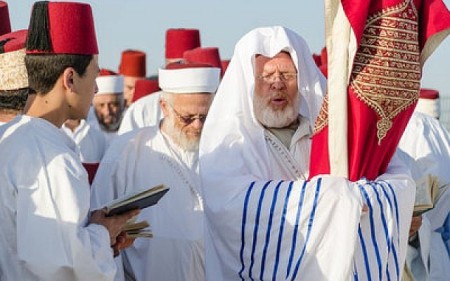 The Samaritan community exists today in Israel in 2 small communities – one in Holon and one on Mt. Gerizim. The number of individuals in the community today numbers less than a thousand, after a peak of approximately a million individuals during the Hellenistic time period in the 2nd century BCE.

According to Jewish tradition, the Samaritans are descended from a population which was transferred into the Galilee after the Assyrian conquest and exile of the native Israelite population in the 8th century BCE. These newcomers brought their pagan religion with them, but were not successful. They conjectured that a new place means a new, local god and took upon themselves certain aspects of Jewish belief. They also took on the language and adapted Jewish traditions to their circumstances, such as claiming that the center of practice was on Mt. Gerizim.

The Samaritan community themselves support a different story. They say that not the entire Israelite population was exiled after the Assyrian conquest. Those who remained kept their traditions and continued the Jewish way of life. They continue to use the ancient Hebrew script and celebrate Jewish holidays.  They point to the absence of Jerusalem in the Pentateuch to base their claims on Mt. Gerizim being the “place that God will choose” mentioned so many times in Deuteronomy.

The new idea elucidated by this study is another indication that nothing in history is 100 percent. The suggestion is that the Samaritans are the remnants of those few Jews who did not go into exile at the Assyrian conquest. Those Jews who remained in the Galilee may have taken non-Jewish wives which explains the genetic mixture in the Mitochondrial DNA. The paternal line, however, remained within the Israelite remnant.

After the return to Zion under Ezra and Nehemiah during the 6th/5th century BCE, the need to discern between those who had lived through the Babylonian exile and those who had remained in the land, pushed the Jewish and Samaritan communities apart and led to divergent traditions, a rift which continues until today. Turns out though, that these two communities are closer neighbors than either one thought.