Today, I had  another Places in Your Neighborhood trip  – this month, to Ramle.  We all met by the Interior Ministry local office in the mall and headed to our first stop – the Great Mosque of Ramle.
When I went to do my research in anticipation of this trip, I barely squeaked inside to see this magnificent building.  I had gotten there at 10:25 a.m. and despite the sign, the mosque is only open until 10:30.  But after repeatedly ringing the doorbell, and calling the number on the sign posted at the entrance, an elderly gentleman let me inside.  My friend and I quickly removed our shoes at the entrance to the mosque and went into the cavernous building promising to be quick and out in 5 minutes.  As we exited, I asked the caretaker what was necessary to come and visit the mosque with a group.  He replied that I needed to get there on time and then I should just ring the bell and someone would let me in.
So, today, at 9:25 I arrived with my group.  As I rang the bell and patiently waited, I started to ask them if they had ever been to a mosque before and explained that we just needed to wait for the caretaker to open.  After ringing the bell twice more, I called the number listed on the entry sign.  When someone finally answered, I was told that the caretaker is ill today and not coming to open up.  The telephone answerer was at a doctor’s appointment and couldn’t make it there for another half-hour or so (if at all).  Thus started my day in Ramle.
Ramle doesn’t run at the same pace as other places.  Yes, there is just one person to open the mosque, one person who sits at the White Tower, and a few more who work at the Pool of Arches.  If they are sick, have a doctor’s appointment, or for whatever reason can’t come to work, the sites are closed.  Calling ahead and making a reservation increases your odds of actually being able to get into the sites, but there is no guarantee.
An interesting phenomenon happened within the group after being denied access to the mosque.  They accepted Ramle for what it has become – an interesting place with a lot of history, but left in a different time.  And every site we arrived at after the mosque, and had someone there to let us in, was seen as a fortuitous event.
Downtown Ramle today is not a streamlined, modern city, but a kind of ramshackle of buildings from across the centuries.  Some of the old buildings are really decrepit, falling apart, and in some instances falling down.  We saw a building which collapsed only 2 weeks ago.  Obviously renovated in the 1950’s on a more ancient foundation, we saw how they used clay jars to fill in the spaces between the first floor arch and the second story.  Antique cars filled the streets alongside more modern buildings like the courthouse.  There are even a few buildings in the International (Bauhaus) style.
But back to the Mosque.   The Great Mosque in Ramle started as a Crusader Church.  It is one of 3 Crusader churches still standing in its entirety today in Israel (the other two being in Abu Ghosh and  in the Moslem Quarter of Jerusalem’s Old City).  The style is typical Crusader Basilica architecture with a long central nave flanked by two side aisles.  Small, latticed windows, combed stones with some mason’s marks designate this building as a Crusader structure.  The Crusaders captured Ramle (without a battle) on June 2, 1099 on their way to Jerusalem.  Thinking that Ramle was the site of Ramatayim Tzofim or perhaps Rama (two towns associated with King Saul), they stationed a bishop here.  The church was constructed in the first half of the 12th century to commemorate another personality, Joseph of Aramathea (apparently Ramatayim Tzofim was equated with Aramathea) who requested that Jesus be buried in his personal burial plot.
The Mameluke Baybars conquered the area in 1266 and  in the late 13th century the church was rededicated as a mosque. 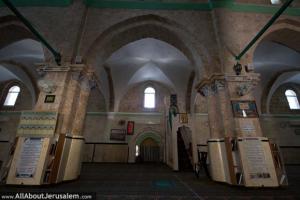 The transition from church to mosque necessitated a few changed to the interior and exterior structure.  The entrance to the church was from the short end of the rectangular building in the west, as direction of prayer in early churches was almost without exception to the east.  In contrast, entrance to mosques is from the long side with prayer being directed towards Mecca (in Israel this is to the south).  The Crusader doorway was filled in and new doors were opened in the north wall.  A prayer niche (michrab) was added to the southern wall of the church, as well as adding a minbar (raised platform from which the imam  gives his sermon on Fridays).  A women’s balcony was added, pews were removed and carpets cover the floor.  The bell tower was converted to a minaret.  Recently, green metal beams were added to shore up the building. The actual stones, the capitals, the arches, and the stark Gothic interior remain  and can be seen until today.

That is, if the caretaker comes to work.