As the Jewish New Year, Rosh HaShana approaches, and families get ready for three days of eat, sleep, pray, we will start to hear the well-known phrase – Enough Food to Feed an Army. This summer, in the fields of Netzer Sereni, near Ramle in central Israel (other posts about Ramle here and here), archaeologists found the remains of Enough Booze to Hydrate an Army.

Alongside Paleolithic flint tools from 200,000 years ago were found hundreds of glass liquor bottles from 100 years ago. The nearby building housed agricultural implements during the Ottoman era and was reassigned as a garrison for British soldiers during World War I. Those soldiers, the Egyptian Expeditionary Forces, conquered the cities of Lod and Ramle on November 15, 1917, controlling them and the farmland around them in the British fight against the Ottoman Turks. Under General Allenby’s orders, the British soldiers stayed in the requisitioned buildings for 9 months before heading to targets farther north. Inside the building were found belt buckles, uniform buttons, and parts of riding equipment.

A few meters/yards from the building was the trash heap (seems the best stuff is found in the trash). This collection of discarded items gives an insight into what they did for 9 months here. Apparently, they wiled away their free time by drinking a fair amount of liquor. In fact, 70% of the trash heap was composed of liquor bottles. According to Brigitte Ouahnouna, a researcher in the glass department at the Israel Antiquities Authority, “This is the first time in the history of archaeology of Israel in which an assemblage of hundreds of glass bottles from the British army camp from World War I was uncovered.” 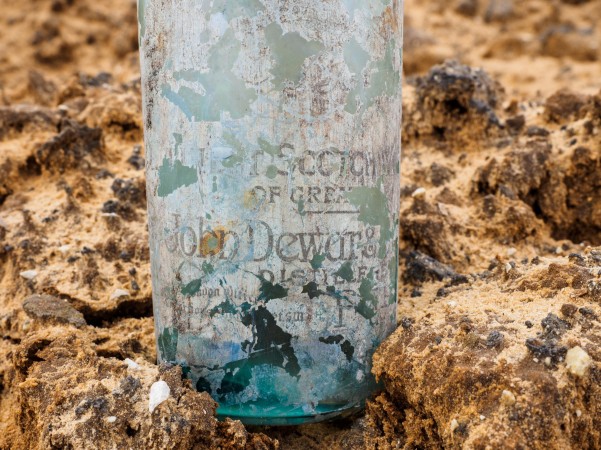 Besides providing a way to socialize and pass time, the drinks were a taste of home. All of the bottles were imported from Europe – no local brews were found.
As we are in the 100 year anniversary of the British foray into Middle East politics is being celebrated this year, get together with a friend and raise a glass. Imported liquors only, please.