Sometimes your story needs updating. I used to stand at Qumran and look at the caves in the rock escarpment facing the Dead Sea and tell this story: From these caves came the Dead Sea Scrolls (DSS). The discoveries starting in 1947 and stretching into the mid-1950’s yielded the thousand or so fragments which make up the DSS, the oldest known copies of the books of the Jewish Bible. All of these fragments were only found in 11 caves.

As my tourists stood and looked at the numerous caves, their eyes grew wide and they imagined the treasures yet to be found. I dashed those dreams by stating that all those caves had been fully explored and that there are no more fragment-laden caves. There are and only will be 11 DSS caves.

That story worked until this year. A 12th DSS cave has been discovered, but with a twist – there are no written scrolls in it. Cave 12 (Q12) is the first DSS cave discovered in 60 years and the first to be properly excavated by archaeologists. The previous explorations, more than 60 years ago, had one goal – to retrieve scrolls – with little concern for other archaeological remains. 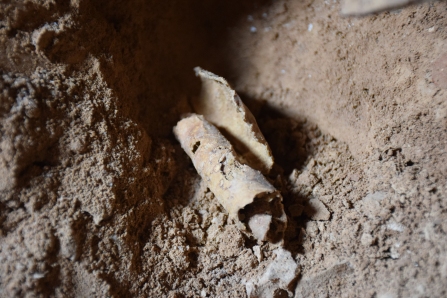 If there are no scrolls, why does Q12 fit into the elite group of DSS caves? Q12 yielded many remains. A 1950’s style pick axe alludes to looting which may have occurred here. Broken, empty storage jars and lids from the Second Temple Period lead archaeologists to imagine ancient texts which may have been stored here. They also found many signs of literary activity. A piece of parchment ready for writing, a leather strap for binding scrolls, and tendons and pieces of skin for connecting parchment were overlooked by those who wielded the pick axes in their hunt for the prize – written fragments.

Being a repository of DSS was not the first usage of Q12. Chalcolithic and Neolithic flint blades, arrowheads and a stamp seal of carnelian attest to its use far in the past.

Archaeologists are excited by the discovery of Q12. The revelation of another DSS cave just underlines that we cannot know for certain the things that don’t exist.