Here, in Israel, we live connected to the earth.  The Torah, the cycle of holidays all have a facet which can only truly be appreciated if you go out into nature.  Every year, I watch the changing of the seasons through not just weather, but the effect the weather has on the natural world around me.  One of the most visible     changes as winter turns to spring and then to summer is the line-up of flowering plants.  It is interesting that flowers tend to appear in color order.  The insects needed to pollinate the plants have different visual capabilities, and so, the plant world and the insect world coordinate their dances.  For example, the red flowers bloom when the insects which see that color best are at their peak.  Fascinating.

Generally speaking, the reds flower first, followed by the whites and then the yellows.  These are the dominant flower colors in Israel.  (Purple, blue, brown, green are sprinkled in here and  there.)  It is interesting, therefore, that red, which generally  goes first, has a few “hangers on” throughout the season.

While out walking in the forest a few weeks ago, I noticed that the Dam HaMaccabim had started to bloom.  Dam HaMacabim is the last of the red flowers to bloom and it got me into a discussion with Steve about the different red flowers we have in Israel and the ways to distinguish between them.

Two flowers, the Anemone and the Poppy are very often mixed up. (There is also a third similar red flower – the buttercup.) I only could guess which is which based on the time they are blooming.  Anemones are among the first on the Israeli plant scene to flower.  They usually begin flowering very early in the season when it is still quite cold outside and the days are short.  Poppies flower a month or two later, when the weather is much warmer.  There are a few other differences, though.  The main difference in  appearance is between the ornamentation on the petals of the flower.  Quite simply, the Anemone has a white necklace and the     Poppy has black spots near the center of the flower.  The picture below was taken today near Beit Guvrin/Maresha.  The black spots and the fact that it is flowering in late April tell me that it is  a poppy 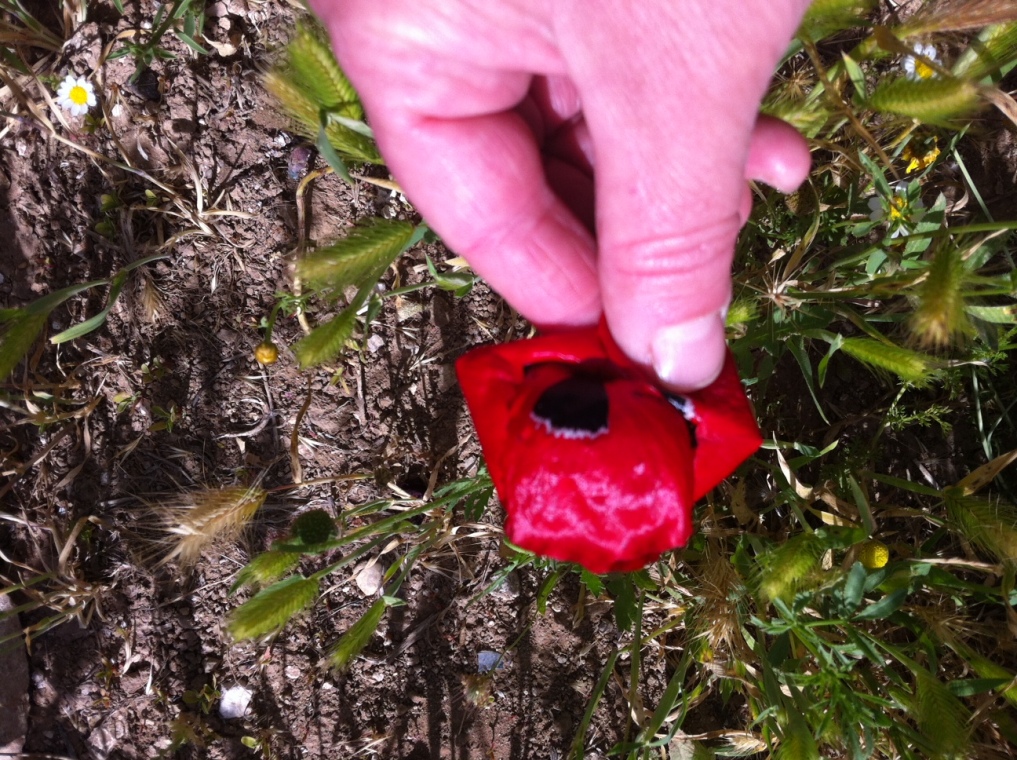 The anemone has a unique name gotten through a kind of twisted telephone game.  Ready?

One day, while hunting wild boar, the Sumerian god Tamuz (known as     Nea’man in Phoenicia and morphed into Adonis in Greek) was wounded and died.  The god himself turned into a flower, and the blood from his wounds turned the flowers red.  The name “Nea’man” becomes  “An-Nu’man” in Arabic which becomes Anemone in English.  Told you it was like a telephone game.

There is a common thread in this story which seems to creep up in tales and symbolism of red flowers.  Red flowers represent death, especially violent death.  In the above story, the red came from Adonis’ wounds during a hunting accident.  Poppies, too, have this connection to death.  Poppies are England’s national symbol for fallen soldiers during World War I as the poppies bloomed between the trenches,  where so many soldiers lost their lives.

from IN FLANDERS FIELDS by John McCrae

In Flanders fields the poppies blow
Between the crosses, row on row,
That mark our place; and in the sky
The larks, still bravely singing, fly
Scarce heard amid the guns below.

We are the Dead. Short days ago
We lived, felt dawn, saw sunset glow,
Loved and were loved, and now we lie,
In Flanders fields.

In Israel, most people associate a third red flower, the Dam HaMacabim, with Israel’s Day of Remembrance for the fallen soldiers, policemen, and     prison workers who died in the line of duty, as well as those who died in terror attacks.  At every ceremony, stickers are handed out to those who come, with a picture of the Dam HaMacabim flower.  It is the latest blooming red flower in Israel and always blooms  around this day.  Its red flowers are very small, like drops of blood.  According to the tales, every place where blood has been spilled in service of the country, a flower will grow.

from DAM HAMACABIM by Yitzchak Sadeh

In the diaspora, our blood has been spilled like water for many     generations,
Hundreds over the years, in every land, in every climate,
But no plant grew from our blood, no flower bloomed,
Only a puddle remained, a puddle of blood,
And over the years, this, too, dried up.
Only in this country, in our homeland, rises up between all the other flowers
A lowly, small, red flower and it is called Dam HaMaccabim.