In honor of the start of October and spooky Halloween stories,  I have a post about cemeteries – and not just any cemetery, but the ancient cemetery on the Mount of Olives.

I like visiting cemeteries.  OK, there’s the confession.  But you may ask why?  What led a mild-mannered midwestern Middle Easterner to like cemeteries?  I have come to recognize that cemeteries provide a window into life.  All the history found in history books can be read through cemeteries.  All the major human, political and natural events show through the graves themselves.  Drought, plague, war, peace, movements of populations, ideas.

Recently, I attended a continuing education morning on the Mount of Olives.  It was an interesting session walking through some of the 150,000 Jewish graves on the sides of the ridge which provides a view of the Old City of Jerusalem  Indeed much of the Jewish history of Jerusalem can be read through the graves and monuments found here.

One grave which continually catches my eye is that of Rav Shmuel Salant.  Rav Salant came to Jerusalem in 1840 with his wife and son after being advised that the warm climate would help his lungs.  He was 24 years old.  Over the course of the next 69 years, he 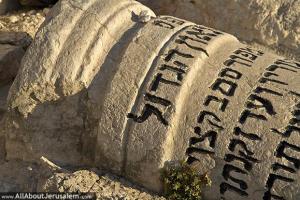 served as Chief Rabbi of Jerusalem.  When he was not in Europe collecting money for the poor Jews living in Israel, he would sit on a stone bench in the Old City of Jerusalem.  People would come and meet him on this bench and ask him questions as he was a known Torah scholar and Talmudist.

When he died in 1909, he stipulated in his will that he wished to be buried on the Mount of Olives and that his stone bench, on which he had sat countless hours, should be his tombstone.  Unbeknownst to him at the time, when archaeology was in its infancy and digging in the heavily populated Old City was impossible, his “bench” was actually a toppled Roman column from the Cardo, erected  about 1600 years before!

A few elements from the story are interesting to me.  First, one gets a picture of what the Old City must have looked like before archaeology.  One imagines “finds” laying around, waiting for someone to come and use them or move them around.  The common debris of the ages, waiting for modern archaeology to make sense of the picture, but not waiting passively in some restricted area.  Rather, in a natural way, the past interacting with the present.

Secondly, the Rav Salant’s bench/column is long – it invites another to come and sit next to him.  He was a person who connected to the people in Jerusalem.  He actively worked to collect money to be distributed to the poor from different ethnic backgrounds – quite revolutionary for his time.

The third element from the story which is interesting to me is that Rav Salant was attached to his things.   He chose an element from his life which he wished to represent him to the world after he died.  The choice of his bench, where he connected to the people of Jerusalem was an obvious choice.  It is interesting that there is a cross-cultural need to be buried with one’s things.  The obvious example (and the most
extreme) is the Egyptian pyramids, full of entire entourages of figurines and objects which the ancient Egyptians believed would be needed in the next world.  In the First Temple period tombs behind the Begin Center in Jerusalem, a small golden amulet was found among the bones – the oldest biblical text ever found – but again pointing to a
need to be buried with ones things.  It is generally believed that in Judaism, “you can’t take it with you and you don’t need it” in the next world, but as human beings, we acquire things and we become attached to them.  In a certain sense, our things represent us, mirror who we are.