(OK, I know that never is a long time, but in historic time, topography/geology doesn’t change.)  Routes that develop naturally (through usage and not through planning) form where the topography makes such routes easy.  People and animals tend to be lazy.  If they need to get from point A to point B, then they will pick the way on which they expend the least energy to make the journey.
The same is true with fording bodies of water, such as rivers and streams.  Generally, places where the topography made fording easier in the past are the same places where bridges are built today to cross those bodies of water.One such example has to do with the Jordan.  By looking at the Jordan today and the available crossing points today, you can relate these places to Jordan crossings from the Bible.Why does the Jordan have only a few places available for crossing?
The places where the water is fordable are the places where the nehalim (streams) coming from the west empty into the banks of the Jordan (or in the vicinity). The nehalim carry with them silt from the mountains and create a sort of “sand bank” where the Jordan is narrower and easier to cross. In these silty spots, one could send a boat with a pulley system, or in Roman times, even build a bridge.

What are these crossing places?   Starting in the North, the beginnings of the Jordan are in the swampy Hula Valley.  There is no crossing a swamp, so the first available place to cross was where the geology changes – at the juncture of the Hula Valley and the Heights of Corazin, at the Bnot Yaacov bridge.

South of the Kinneret there are several crossings of the Jordan.
Tzemach – immediately to the south of the Kinneret
Gesher – at the confluence of the Yarmuk (from the east)  and the Jordan
The Jordan River Crossing – opposite Beit Shean – at the mouth of Nahal Harod
Adam Bridge – at the mouth of Nahal Tirtza (this one leads directly to Shchem/Nablus and is mostly likely the route the Patriarchs took when entering the Land)

Qesr al Yehud (Castle of the Jews) is being developed by the Tourism Ministry as a site for tourists.  The site was off-limits for civilians for over 30 years – a closed military area  – as it lies on the Israel – Hashemite kingdom of Jordan border.  Before that time, however, many monasteries and  capellas sat near this area of the Jordan and many pilgrims visited.

What makes a point on a route into a destination?  Routes, and especially confluences of routes or crossing points, are points of human meetings and activities.

Qasr al Yehud is thought to be the spot where the Children of Israel crossed the Jordan on their  way in to Israel (Joshua 3:7-17). It is where Elijah and Elisha forded the Jordan on Elijah’s journey to the divine chariot (II Kings 2:1-12).  According to Christian tradition, it is also the place where John baptized Jesus (Matthew 3:1-17). 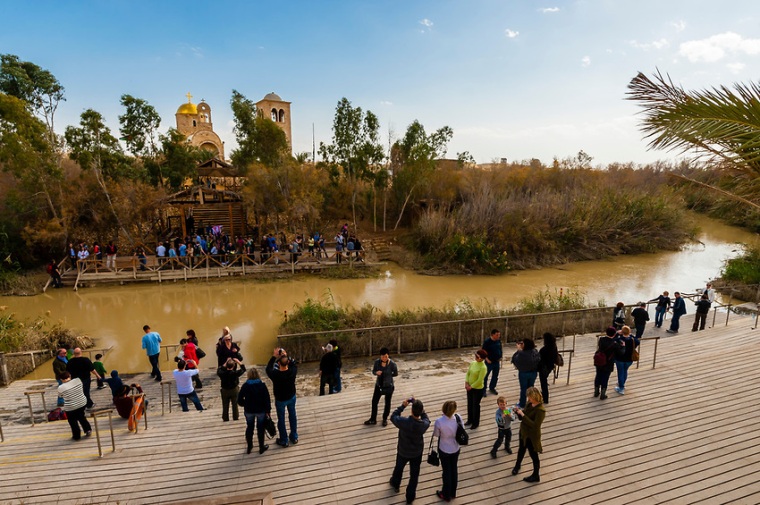 It brings up an interesting debate. I hear frequently from people I guide, “How can we really know that this is the exact spot where such-and-such an event took place?”  And I understand from where the question is coming.  Biblical events happened a long time ago (at least in the historic framework), and there are no signs left stating: “The Children of Israel crossed here” or similar things. But what I can tell  people is that the topography and geology during the Biblical era was extremely similar to what it is today. It is reasonable, therefore, to place Biblical events in places where the physical lay of the land indicates that such an event would have been likely.

Walking and touring the Land of Israel today, with eyes open to the physical surroundings, helps one have a unique perspective on Biblical events.  Come to Qesr al Yehud and see for yourself!