Next week, I will be offering a Places in Your Neighborhood trip to two water sources:  Nahal Prat and the Jordan, so it is time to complete last week’s discussion of water.

Nahar, Nachal, and HaYarden have one common factor – they are vectors. That
just means that they have a path which they follow to take water from one place to another.  Israel is a hilly country and water seeks the lowest level, so this type of feature is very prevalent.

A Nahar is a large, flowing body of water.  There are two main naharot mentioned in the Bible – Nahar Prat (Euphrates River) and Nahar Mitzrayim (Nile River). The main purposes of naharot in the Bible are for denoting borders (people cross over the nahar to get to another land), drinking, and irrigation.  There are no naharot in the land of Israel.  The lack of a nahar in the Land of Israel means that there are no “borders” between the people who live in the land. 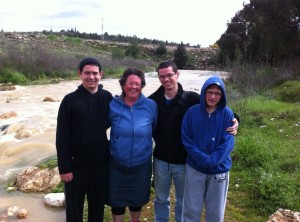 In contrast to nahar is nachal.  A nachal refers not to water, but to a place which, at a minimum, has a potential for water.  These stream beds may always flow, or only for a few hours a year during flash floods.   Eight different specific nechalim in Israel are mentioned in the Bible.

This difference, between a nahar and a nachal is crucial in understanding the mission of the Jewish people in the land of Israel.  Before entering the land of Israel, the children of Israel ask G-d what it’s like there.  I think of this as kind of a consultation with the
tour guide.    In Deuteronomy 11:10 we get to the core of this description.  Israel is not Egypt;  it is supplied with water by rain (not by a nahar – the Nile).  G-d’s eyes are always on Israel (to provide sufficient water) which also means that G-d’s eyes are also
on the land’s inhabitants to determine how much rainfall will be provided.  The Children of Israel must be aware of their actions and how they affect their survival.  They can walk around the land and see  the potential for water through the dry nechalim.  This is the complete dependence on G-d and a continual striving to do good deeds, mitzvot.  G-d sees Israel’s potential.  That’s awesome!

Now maybe you noticed at the beginning that I put The Jordan (HaYarden) in its own category.  Most English translations of the Biblical text translate HaYarden as the Jordan River.  In the Bible, however, never once is HaYarden referred to as anything other than HaYarden.  This body of water, which flows continually and fluctuates in depth and course, is mentioned 181 times in the Bible.  (The next runner up within the land of Israel, Nahal Kishon, is mentioned only 11 times.)  The Jordan figures prominently in 3 stories.

#1:  Children of Israel enter the Land of Israel crossing The Jordan.  This story is a replay of the crossing of Yam Suf (mentioned only 23 times) but forms the basis of the Jewish people in the Land of Egypt.  During the crossing, they take 12 stones from The Jordan to make one monument.  The Jordan makes us one people.

#2:  Elijah the prophet leaves the people of Israel by ascending into the sky near The Jordan.  Elijah leaves his leadership role and his life when he crosses The Jordan.  The
Children of Israel, the country of Israel, need a new face, Elisha, one which will connect more strongly with the struggles of the people.  The role of The Jordan here is to cement the leader, Elisha, with the national experience. Leaders who can no longer be effective, such as Elijah, are destined to die on the other side of The Jordan, symbolizing their distance from the Jewish people.

#3:  The Jordan provides healing for the Aramite king, Naaman who is afflicted by leprosy.  He comes for a cure to Elisha and Elisha tells him to go and wash in the waters of The Jordan.  The Jordan is muddy and Naaman becomes angry.  “Are not the waters of the rivers of Damascus,  better than all the waters of Israel?”  But sometimes being a Mighty River is not the best medicine.  Leprosy, associated in the Bible with speaking improperly, can be cured by a bit of humility.   Dunking 7 times in the murky waters of The Jordan takes one down a notch, and works wonders (literally for Naaman).  This reminds us that this important body of water is not meant to build up and glorify Israel.

What can we learn from these three stories about The Jordan?  The Jordan is unifying, clarifying and humbling.  This is no ordinary River, meant to be crossed, drank and siphoned off to fields.  This is no mere creek or wash, waiting for us to pray for it to be filled.  The Jordan is a symbol of the Children of Israel as a nation, and as such, the most important body of water that exists. The Jewish people ebbs and wanes, we meander in our path, we are surrounded by thick brush amidst arid land, but we continue to flow.

So next time you are at Qesr al-Yehud, Gesher Bnot Yaacov, or Kayaking in the north, remember you are not encountering a river, rather you are experiencing The Jordan, and it is Mighty indeed.