I find the experience at the Church of the Holy Sepulcher (COHS) to be raw in every way.  From the building itself, sitting in its Crusader glory (mostly), with sections under deliberate neglect and lack of natural lighting, to the ceremonies and squabbles of the various Christian sects which control specific real estate in the church, to the vast numbers of pilgrims of all kinds who come and wait patiently in line and pour their sorrows out on the unction stone, there is very little smoothed over to make it politically correct.  In every way, the COHS is set up to make you feel uncomfortable; and, for me, an orthodox Jew, it also pushes me beyond my comfort zone.   According to Ginni Rometty of IBM, “Growth and comfort do not coexist,” so being uncomfortable is not necessarily a bad thing, and it keeps drawing me back to be fascinated anew by the COHS.

I am not the only one who finds herself on shpilkes there, however.   Even Constantine the Great, the builder of the first COHS was uncomfortable with the building from the get go.  Why? Location, location, location.

The COHS was built on the supposed site of Jesus’s burial in order to provide a shrine for the seminal Christian act.  One might even conjecture that had Jesus simply sermonized, prophesied, and performed a few miracles, after his crucifixion by the Romans, his followers would have made up a small, insignificant, sect within Judaism.  We know that several small sects, with non-normative Jewish beliefs or practices existed at the time.  These sects, such as the Essenes, were systematically destroyed by the Romans during the time of the Great Revolt (66-74 C.E.)  The belief in Jesus’s resurrection, however, set Christianity apart from Judaism. Christianity’s Jewish roots, and the fact that Jesus lived and died as a Jew, lead to the difficulty in the location of the COHS.

Constantine realized that Jesus’s death as a Jew would include his being buried OUTSIDE of the city walls, according to Jewish custom.  Constantine accepts this as fact, even though he is persuaded to build his monumental church in memory of Jesus’s burial INSIDE the city of Jerusalem of his day (4th century C.E.)  How these two are related, and how they can both be true and accurate takes us on a journey of the walls of Jerusalem. 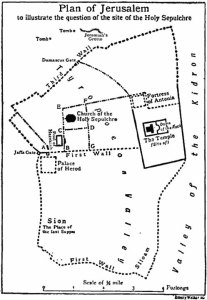 According to Josephus, Jerusalem has 3 walls in the northern end of Jerusalem which were built at different times. The First Wall (not really the first, but the Romans considered it the first) was built during the reign of Hezekiah during the 8th century B.C.E.  It runs along David Street of today, straight from the area of Jaffa Gate to the Temple Mount.  The COHS is clearly outside of this wall.

The Third Wall, which runs north of the Old City of today, was built in 41 C.E.  It runs much north of Damascus Gate and encompassed a huge tract of land.  The COHS is clearly inside this wall,but the wall was built years after the crucifixion.

The interesting wall is the Second Wall.  We do not have clear archaeological evidence for the exact path of this wall, but according to Josephus, the wall went from somewhere near the Jaffa Gate to the Antonio Fortress (on the northwest corner of the Temple Mount) and was most likely built in the Hellenistic time period (4th – 2nd century B.C.E.) Excavations in the basement of church adjacent to the COHS of today have uncovered what may be a gate of the city of Jerusalem in the time of Jesus.  It is as yet unclear as to whether this gate and the associated stairs and pavement were from the Second Wall or from the time of Hadrian (134 C.E.)  If it is part of the Second Wall, then the location of the Church of the Holy Sepulcher would be proven without a doubt to have been outside of the city during the time of Jesus.
Constantine didn’t learn archaeology so how could he build the church where he did?  To quote the Fiddler on the Roof – TRADITION.  There was a long standing tradition from Christian pilgrims of the site of the crucifixion.  Many times in absence of scientific proof for a location, tradition provides us with a good clue.  Constantine went with the pilgrims’ traditions over his intellectual concerns, and, in the end, turned out to be plausible even on academic grounds.