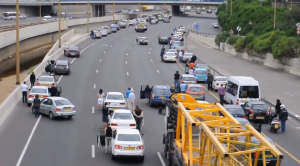 Today, Israel stopped for 2 minutes for a siren.  Every year on Holocaust Remembrance Day, sirens sound at 10:00 a.m.  Cars on the roads pull over and let their occupants out to stand in testament to the 6 million Jews who were killed in the Holocaust.  Shoppers stop, carts full, in the grocery story.  In every office, workers pause and stand for 2 minutes.  And I, hanging laundry in the bright sunshine, also stopped, the wail of the siren reverberating in my ears so much it hurt.  I, too, remembered the victims of the Holocaust.  The ones who died and the ones who lived.  But I couldn’t help my mind from racing.

Sirens.  Why are we standing here?  We only have 90 seconds to reach the nearest shelter (or less depending on where you were).  I was taken back to sirens in my experience, the sirens warning of a rocket attack during Operation Protective Edge (Gaza War – 2014) last summer.  I have written about the effect of sirens on Lou, my grandson here.  But a few weeks ago, I was faced again with the confusion of those who did not experience last summer in Israel, during a recent tour with some businessmen.

“We understand there was a war, but it didn’t really affect you, did it?”

People don’t understand how small Israel is.  Israel is the size of New Jersey and there is no place in this small country that even fairly simple rockets can’t hit.  The rockets used in the attacks were assembled in Gaza, not shipped in from a large munitions factory in a world superpower.  And yet, they succeeded in reaching Haifa, Beer Sheva and Tel Aviv.  Jerusalem, with its large Arab population and important Islamic sites, was not spared.  It is an interesting note that Gazans were willing to fire on the third holiest site in Islam in order to kill Jews.

And I guess that pulls me to another parallel.  Another layer has been added to the Israeli experience.  When we remember the horrors of the holocaust during the two minutes of sirens, we add our own experiences to the past collective memory.

Every year during the Passover Seder, we reenact the Exodus from Egypt.  We retell the horrific events and see them to their resolution.  It is not a cold, dry retelling of long-gone events. But rather, “Each person is obligated to see himself as though he came out of Egypt,” states the Hagadah.  We are commanded to turn the story into our own, to layer our personal experience on the accumulated collective one.

So back to the sirens, we, now have first-hand experience on what it is to be a nation under siege.  We know what it is when a people rise up against us to obliterate us.  We look for “shelter selfies” on facebook to know that all our kids are o.k. The Palestinians want to push Israel into the sea.  They have been saying it for decades. Their maps do not include a Jewish state at all.  And then they shoot rockets.  Israelis, including Israeli Arabs are pushed into their bomb shelters, random stairwells, and lay on the ground with their bodies covering their children, in order to protect themselves against an all-out war against us as a people.

Luckily for us in 2014, the entire operation only lasted a few weeks.  Luckily for us, we didn’t lose 6 million Jews (the approximate Jewish population of the State of Israel today).  Luckily for us, we had the Iron Dome to minimize casualties.  In no way does our experience with sirens match the horrors of the Holocaust.  And yet, we are able to connect to the Holocaust this year in a new way, adding our own personal stories of anguish, trepidation, courage, survival, and hope for a better world.

“We understand there was a Holocaust long ago, in the time of your grandparents, but it didn’t really affect you, did it?”

Each person needs to answer this question for himself,  but as for me, it makes me stronger, more resolute, and more sure of the path I take today.