Who is buried in King David’s tomb?  Could it possibly be King David?

Going back to the first instance the place is mentioned in the Torah, I Kings 2:10, King David’s death and subsequent burial are described.

So David slept with his fathers, and he was buried in the City of David.

We have replaced one set of questions with another.  We now need to ask, “Where is the City of David?”   II Samuel 5:7 states:

But David captured the stronghold of Zion; it is now the City of David.

This is part of David’s conquest of the Jebusite capital of Jerusalem, which he called also Zion. 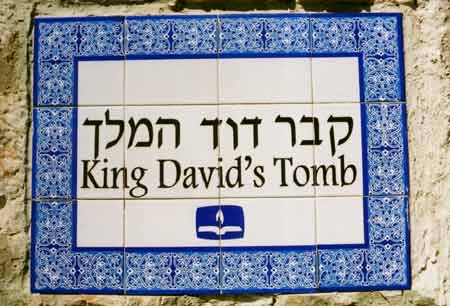 After King David, during the reign of Hezekiah in the 8th century B.C.E., the city swells in size due to the absorption of the refugees from the Assyrian conquest of the Northern Kingdom, Israel. The first settlement of the Western Hill (Armenian and Jewish Quarters and Mt. Zion of today) is established during this time period.  This is the first time people are living on today’s Mt. Zion – it was not part of the city in the time of King David.

In 586 B.C.E. the Jews of Jerusalem are defeated and the residents are carried off to exile.  About 150 years later when Nehemya returns to rebuild the walls of Jerusalem, he mentions the place of the Tomb of David, remarkably recalling the spot over a long period of time.

But that is where the line ends.  From that point onward, the knowledge of the location of King David’s tomb is lost.  Why then? The destruction of the Temple and the Western Hill by the Romans in 70 C.E. and the subsequent remolding of the city into a proper Roman polis during the reign of Hadrian 70 years later, erase the precise location.    Erasing memory is a powerful political tool, and it was not lost on Hadrian, who tried to sever all Jewish connection to Jerusalem in his transformation of the city.

What does exist on Mt. Zion is a Roman era building which was potentially Jewish due to its apse facing the Temple Mount.  This could have been a synagogue at the end of the Second Temple Period, or perhaps an early Judeo-Christian church.  This synagogue/church has a second floor.  Because of the specific wording in the Christian bible, this entire complex becomes identified with the Room of the Last Supper (from the end of Jesus’s life), with the Tomb of David on the first floor.

So who’s buried in King David’s tomb?  Maybe no one; however, centuries of pilgrims to the site make the site important, regardless of whether or not anyone is in the tomb.