Israel is the stage for the Biblical pageant.  The Bible – with all its clues about the topography, with all its knowledge of the flora and fauna, all its political and social savvy – is not a history book or an atlas.  One interest of archaeologists throughout the history of the field is to match biblical sites to archaeological finds.  Recently dug, the site, Khirbet Qeiyafa, has challenged archaeologists to fit it into the biblical puzzle. 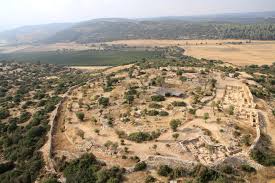 Qeiyafa, sitting above the HaEla Valley, has one layer; that means that the city was occupied only for one period of time, destroyed and never settled again.  Carbon 14 dating and pottery analysis places Qeiyafa in the 10th Century B.C.E., a time period, with a dearth of findings, but important as it is the time period of David and Solomon (another finding from this time period is found here).

Material evidence includes no pig bones, a sign that this was not a Philistine community, as pork formed an important part of their diet.  Inscriptions of Canaanite/Proto-Hebraic script indicate that this was either a Canaanite or a Jewish town.

The size of the town, half the size of Jerusalem during that time, and its orderly layout suggest that this is not a farmers’ shelter, but that it belonged to a strong, centralized government, as some claim King David had.

If this is part of King David’s kingdom and a biblical  era town, do we hear of it in the Bible?

“This was the portion of the tribe of Judah by their clans…Yarmut, Adullam, Socho, Azeka, Sha’arayim…” Joshua 15

These other towns have all been positively identified and Qeiyafa sits squarely between them.  Identifying Qeiyafa as Sha’arayim links the city even more strongly to David as Sha’arayim is mentioned in conjunction with the story of David and Goliath.

“The men of Israel and Judah rose up with a war cry and they pursued the Philistines all the way to the valley and up to the gates of Ekron; the Philistines fell mortally wounded along the road to Sha’arayim up to Gath and Ekron.” I Samuel 17:52

Standing on Qeiyafa today, you can look up HaEla valley and imagine David coming from the east from the area of Bethlehem.  Looking to the continuation of the valley to the west, you can visualize Goliath coming from the Philistine city of Gath.

It is exciting when all the indicators seem to line up and we can visit a newly discovered town from the time of King David.