Israel has entered winter. The nights are cold, dipping into the single digits centigrade (30’s and 40’s Fahrenheit) and sometimes during the day it rains. During these colder, damper months it is hard to remember that Israel is now in the middle of a drought. Water issues have been a limiting factor in settlement and a cause of conflict for years. Even in the Biblical text, Abraham has disputes over water. Genesis recounts a tense situation in Abraham’s life:

In World War I, Beer Sheva was a target for the British because of the well water there.

Today in Israel, wells are not sufficient to supply the population with water. Israel is forced to turn to other sources, including the development over the last 20 years of desalination.

The first desalination plant in Israel was constructed in the 1950’s for the city of Eilat. There is no fresh water source for this city and if Israel wanted to develop the town into an international port to the east, water was a necessity. The technology of this first plant was distillation, the oldest desalination technique. Distillation was even used in the 1700’s on ships to provide sailors with water. As the quote reminds us, “Water, water everywhere, nor any drop to drink.”

Distillation is costly, however, and by 1973 Eilat had switched to reverse osmosis, a process which forces salt water at high pressure through a series of filters to remove the salt. They located this plant not on the Red Sea but on above a brackish ground water reservoir. This water source was not as salty as the sea and halved the cost of desalinating Red Sea water.

Desalination remained isolated in Eilat until three consecutive years of drought (1998, 1999, 2000) forced Israel to look for solutions to a water crisis in the rest of the country. Desalination again came on the table. Technology had improved, and a new funding strategy of BOT ventures (build-operate-transfer) lured foreign corporations into the equation. A French company built the plant in Ashkelon, which came online in 2005, at a cost of $250 million with rights to collect revenue for 25 years. This plant was the largest reverse osmosis plant in the world at the time with the cheapest water cost at $0.52 per cubic meter.  The construction of the plant in Ashkelon and 3 other coastal plants  jettisoned Israel into the world scene as a leader in desalination. 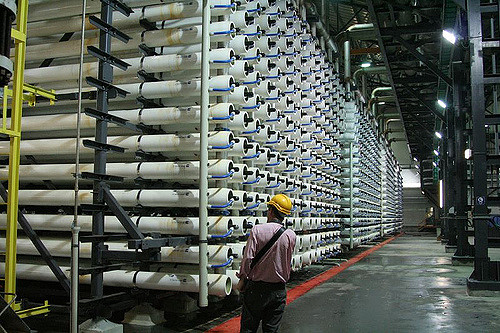 There are environmental challenges in the production of water through desalination. Chemicals released through reverse osmosis and increased saltiness of the effluent released back to the ocean affect marine ecosystems. The biggest economic footprint, though, is from the energy used by the desalination plants themselves. If the energy used is dirty energy, then the carbon footprint from desalination increases. Currently, Israel relies on coal to power the coastal desalination plants. Brackish water desalination plants inland take their energy from the electric grid. Israel needs to develop new renewable energy sources to power her water crisis. Stay tuned for Israel’s emergence not only as a water-technology leader but a renewable-energy leader in the world scene.